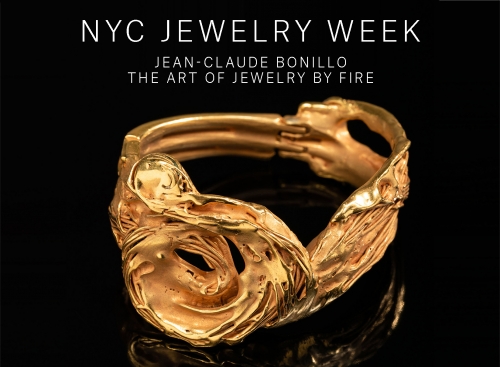 Magen H Gallery and guest curator Marie-Alexandrine Yvernault are pleased to present the first retrospective dedicated to French artist and jewelry designer Jean-Claude Bonillo. The exhibition will showcase around sixty unique pieces in silver and gold (24-carat) plated bronze. The exhibition will be on view November 12th-16th with an opening reception at the gallery on Wednesday, November 14th from 6-8pm.

A true multidisciplinary artist, Jean-Claude Bonillo graduated from the Ecole des Beaux-Arts in Marseille in 1962 and began to actively seek his unique style by practicing as an architect as well as finding influences in his grandfather who was a blacksmith. Having been fascinated with metal work as a child, Bonillo eventually continued his work in sculpture, more specifically, jewelry. He appreciated jewelry in its raw form, an object that decorates the human body as well as an object that exists as a mediator between the person wearing it and its surroundings. Not only did his jewelry have an ornamental purpose, but also became a dynamic sculpture that drew inspiration from the elements of the environment.

Having influences from a blacksmith, Bonillo welded and fused metal curves and twists that resulted in beautifully organic and elegant forms. He created the entirety of his work in his studio in Paris. He has exhibited his work around the world such as United States, Canada, Japan, and United Arab Emirates. He also collaborated with Haute Couture designers such as Yves Saint-Laurent and Nina Ricci. His work is also included in the permanent collection at the National Archives in France.